I tell ya, ya gotta go to Disneyworld

That's what the Doodle said to a friend of ours after getting back from the Best Trip Ever. "It was so wonderful. It's where dreams come true."

We decided five was a good age to introduce our eldest to the wonderful world of Disney. We somehow managed to keep it a surprise; she had no idea we were taking a trip, let alone to the Happiest Place on Earth. Twenty days out from our departure, I started her on a countdown calendar, one that kept her guessing for a full 19 days before she figured it out:

Feel free to grab a Kleenex and take a moment. We've already made a ton of people cry with that one.

It was magical. It was everything it should have been, and then some. Gliding over London on Peter Pan's Flight. Soaring with Dumbo one minute, on a magic carpet the next. Fireworks every night. But the crowning glory was dinner with the princesses at Cinderella's castle (which was distinctly lacking in alcohol, but I suppose it wouldn't do to have the grown-ups get sloshed in front of their kids. I bet some of those princesses long for a glass or two after a long day of forced smiles and sing-song-y voices, though. Let's face it, even Walt must have had to take a break sometimes.)

We'll be riding the wave of Parents of the Year for as long as we can.

In between marathon treks across the Magic Kingdom, I found time to enjoy some fine beverages and great food. It's our family's tradition to hit Romano's Macaroni Grill when in Orlando. The chain hasn't quite made it up to our corner of the world, and features some of the best pasta outside of Italy (sacrilege, I know, but it's damn good stuff), so we have at least one or two nights earmarked for dinner.

Night one was fried calamari and Nobilo Marlborough Sauvignon Blanc (LCBO 554444, $15.70, 12% abv), lobster ravioli and fettucine alfredo. Hunks of warm bread dipped in peppered olive oil and lots of laughs shared and tables drawn on. Night two had an orzo and spinach dish and farfalle with tender chicken and sundried tomatoes. And more Nobilo - a bottle this time, since they were half price and we could bring the rest home if we didn't finish it. (Snicker. That's so funny.) More bread, more eyes rolled in foodie ecstasy, more laughs. Full bellies all around. 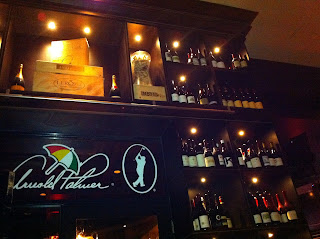 The big find came during dinner at Downtown Disney's Rainforest Cafe: Land Shark Lager, from Margaritaville, Missouri. I had originally asked for a glass of pinot grigio, which came too cold and sub-par. I tried a swig of Hubby's beer and immediately asked for a pint: refreshing, clean, with a fruity sweetness on the end I couldn't get enough of. Think I can find any of it here, north of the Border? Bummer, dude.

Hubby and I even got a night out together, thanks to the free babysitting service provided by Gramma and Pappa. Dinner was had at an ultra-swank, happenin' wine bar called Vines. It was a slick, trendy place with live jazz mixed in with the din of a packed house. The Arnold Palmer Room in the middle of the floor had walls of wine and seating for 20, all for a minimum $1500 bill. Excuse us! (There was even a Ferrari parked outside ...)

The steak-centric menu was all about luxe, with foie gras this and black truffle that on everything. I started with a glass of Marcel Martin Tete de Cuvee Brut Cremant de Loire, an off-dry French sparkler of apple, honey and brioche. Hubby had the Blue Moon Belgian-style wheat ale, which had such a strong coriander smell to it, I thought I was drinking a Caesar, not a beer.

Beef tartare? Yes please. Raw quail's egg as a bonus? Sign me up. Then it was on to king crab-crusted grouper done in a sweet corn sauce with a glass of Gordon Brothers Chardonnay (Columbia Valley, Washington). It was an off-menu selection made by the sommelier after I requested something that wasn't too oaky to go with the umami-ness of the crab and fish. Tons of tropical fruit, aromas of butterscotch and creme brulee, balanced in just the right ways to bring out all the flavours of the dish. Hubby had twin beef tenderloins with a 2008 d'Arenburg The Footbolt Shiraz (McLaren Vale, Australia) a smooth, silky number overflowing with a thick scent of raisins and smoke.

And then we went and played mini putt with the dancing hippos from Fantasia. Cuz that's just how we roll.

It was exhausting, every day up early and staying late to cram in as many rides, parades, meet-n-greets and special moments as we could. But it was worth it. And seeing it all again, this time through my own child's eyes, I wouldn't have changed a thing.