DON’T Quaff This: Pelee Island Winery 2006 Shiraz Cabernet … or, why I hate the term “Cellared in Canada”

Smells like varnish, tastes even worse. ‘Nuff said. We poured that plonk down the sink and opened a Maleta Grape Brain 2004 Cabernet Merlot (which, by the way, is quickly becoming our “house” wine, it’s that good. More to come on that later ...)

Let me vent first about the inane ridiculousness of the term “Cellared in Canada”. The LCBO has taken to putting plonk on the shelves right next to VQA (Vintners’ Quality Alliance) wines from Canada, under the aforementioned heading. It is, I assume, a clever ploy to get cheap, crappy product on the shelves, seen and potentially bought, considering it's right beside the good stuff. If it's cellared in Canada, it must be good, right?

Wrong. For the novice, this is incredibly confusing, because you THINK you’re getting a “Canadian” product. In actual fact, you’re really getting the bottom of the barrel from some place like Croatia that was rejected by everyone else, shipped 10,000 miles to Pelee Island, where it sat for a few days to get that "Canadian" flavour before getting crushed with a bunch of other garbage (both domestic and imported), poured into a bottle, slapped with a label and sent off to the liquor store. Blah.

Tonight’s atrocity was a perfect example. A shiraz cabernet has a certain set of aromas that one would expect. Last year's deck varnish is not one of them. Then I looked at the label: 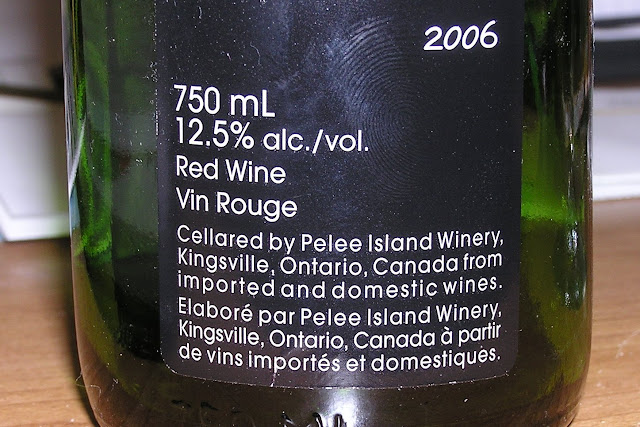 Now it all makes sense. Flush this. And always make sure to read the label very, VERY carefully.