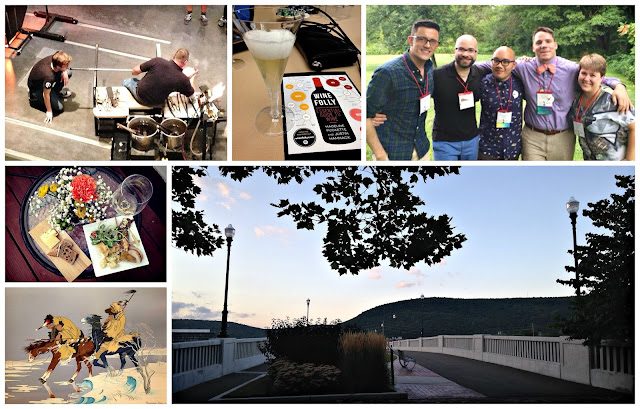 In her opening address to WBC15 participants, Karen MacNeil passed on a bit of advice given to her when she was the wine and food editor of USA Today: "If you know your stuff, you should be able to explain it in 17 words."

1. Glaciers: Big walls of ice that receded from northern New York some 20,000 years ago, leaving behind a tasty soil mix of rock, minerals, shells and silt ... and a few big bodies of water closely resembling digital appendages.

3. #goWBCcanada: Twitter rallying cry for bloggers to come sample Canadian wines. (Who knew you could fit that many people into a single queen hotel room?)

5. Riesling: Grape variety of choice here in the Finger Lakes. Winemakers have nailed both dry and off-dry styles in glorious, manna-from-heaven liquid gold.

6. Sakartvelo: Local name for the country of Georgia, where wine has been made for over 8,000 years in vessels called qvevri that are buried in the ground. Also part of the title of Terry Sullivan's book.

7. Michael Jackson: As Brandon Seager explained it in his session on cellaring wine, some things age better than others.

8. Keuka: The birthplace of U.S. winemaking, a Y-shaped lake that is home to the Pleasant Valley Wine Company, the country's first bonded winery. Too bad about that pesky Volstead Act ...

9. Vibrate: The setting your phone should be on when SOMEONE ELSE IS TALKING AT THE FRONT OF THE ROOM.

10. Bleep: The sound made about two seconds too late after Madeline Puckette's F-bombs during her lively, engaging and inspiring talk on wine blogging success.

12. Kavorka: 1) Latvian term popularized by "Seinfeld", meaning "the lure of the animal."
2) Something abundantly present at Table 12 during the awards gala.

13. Swag: You know you're among social media geeks when there's a round of applause for the portable charger in everyone's bag. (Brought to you by @FLXWineCountry)

14. Awards: Actually having some of the Wine Blog Award winners present this year was nice. And kudos on the positive changes to the nomination and voting process.

15. Lip wrap: One of many technical terms (and double entendres) used by gaffers during live demonstrations at the Corning Museum of Glass. Along with blow, hot, drippy, smooth, pinch ...

16. Hybrids: Grapes that are NOT crappy, no matter what anyone says.

17. Badminton: the world championships in Indonesia may have had the same hashtag, but we OWNED IT. #booyah #thatjusthappened #WBC15  FTW.