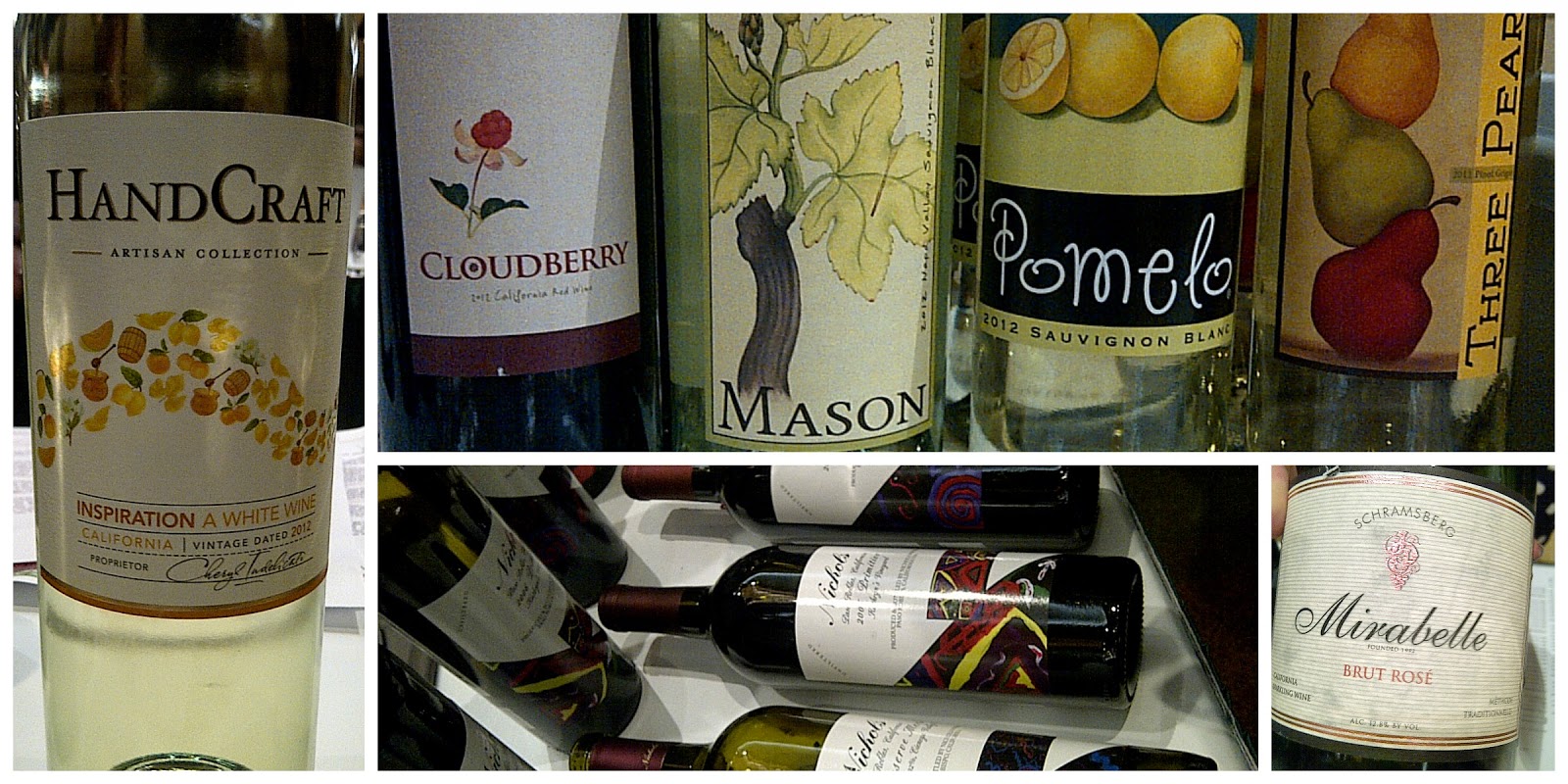 The California Wine Fair is very much like the red-carpet premiere of a soon-to-be blockbuster. The who's who of the industry are there in all manner of attire, three-inch heels included. Cameras flash,  there's the odd squeal of delighted recognition between one celebrity and another. Handshakes, air kisses, business cards and winks are exchanged, and then everyone gets down to business with the wines.

I had my own star-struck moment at this year's show, but it wasn't over some Hollywood ingenue. Oh bliss, joy and rapture! Gloria Ferrer Blanc de Noirs was there! With all due respect to Canadian sparkling wine makers, this bubbly from the Carneros region remains on the top of the pedestal for me. The pale salmon pink was brilliantly clear in the glass, with minute strings of carbonated pearls racing to the surface. On the palate, the wine yielded a semi-sweet mouthful of rosewater and long-lasting fizz.

That's pretty much my "best in show", but I did find some other lovely gems:

Schramsberg Mirabelle Brut Rosé - Peachy-pink tones with a floral nose hinting at strawberries, just the slightest bit of sweetness and a persistent mousse on the palate.

Mason Cellars 2012 Sauvignon Blanc (Napa) - I tried a trio of impressive whites here (see photo) but it was the s.blanc that stood out. Cucumber, honeydew melon and floral notes up front, followed by classic - yet subdued - flavours of citrus and gooseberry. Slightly off-dry with a complex texture of neatly balanced acidity and viscosity. Ends with a smoky flint-and-lemon finish.

Huneeus Wines 2012 Saldo Zinfandel - The plain bottle with its simple crimson LabelMaker tag belied a complex wine within. Starting out with roses in full bloom, it led into a full-bodied palate of jammy, candied cherry, smoke, spice and chocolate, and hung around with a strong, peppery finish.

Nichols Winery 2000 Merlot (Paso Robles) - With a few years under its meniscus, this merlot glowed with  a brickish-orange hue. Six years on French and American oak resulted in a smooth, sleek number with cinnamon, cloves and cedar aromas and a long, woody finish.

Nichols Winery 2006 Primitivo (Paso Robles) - Blackberry and raspberry syrup with hints of rose petal and a drop of honey, followed by a mouthful of tangy, spicy and juicy red fruit that lingers.

Peju 2011 Cabernet Sauvignon (Napa) - California does cab. 'Nuff said. This is classic cabernet from start to finish. The aromas were still pretty tightly wound up, giving off mere hints of leather, green pepper and jam. Chewy tannins and a big, bold presence suggested a robust, show-stopper of a wine to come after a few years in the cellar.

Smith-Anderson Havens 2010 Cabernet Sauvignon (Napa) - Samples from two separate vineyards were being poured; both were full, ripe and thick with tannins. The Spring Mountain cab led off with juicy red fruit and subtle peppercorn, and stayed firm and well-structured through the finish. The Diamond Mountain cab was quite green at first: pepper, mint and other herbal notes, but then it exploded with dark chocolate cherry and a sweeter, more rustic end.

Trinchero Napa Valley 2012 Meritage - Bordeaux blend of cab sauv, merlot, petit verdot and cab franc. Tobacco smoke and red berry aromas carry through the silky body and restrained tannins, while the delicate fruit simply glides along with the current. Already tasting rather sublime, this will age quite nicely for a few years, and then it will take you to a whole other plane of existence.