I stood outside the lobby, weighing my options. Farms and concrete eggs? Paddle boarding? Dining in a cave? Too many choices. Which wineries were we going to? Our Friday afternoon locations were still under embargo, making it delightfully challenging to decide which trip to pick. I wobbled on the fence right up to the last minute, but finally got on the "Rustic Tour" short bus. Then I found out I was going to be dining with the one and only Sandra Oldfield, head honcho of Tinhorn Creek and BC's Twitter Queen. Yes, this was the right bus to get on.

We headed off for the long drive down Highway 97 to the Oliver-Osoyoos region, on the northern tip of the Sonoran Desert and a stone's throw (relatively speaking) from the U.S. border. The terrain turned rocky, ruddy and sun-baked, but still lush, in parts, with orchards and vineyards. We passed beneath McIntyre Bluff, a sheer wall of rock striated with million-year-old scratches left by passing glaciers. (Legend has it that, long ago, members of a native tribe once leaped to their deaths from the bluff's lofty heights rather than be taken as slaves by an enemy band.)

Our first stop was the Fairview site, the former home of a bustling early-20th century mining town, and the current home of wildflowers, endangered black sage and rattlesnakes. (Our WBC greeter was jauntily leaning on a set of long-handled tongs; I'd seen enough episodes of Dominic Monaghan's "Wild Things" to know exactly what that tool was for. Zoiks.)

We followed our guides along a gravel path, listening to tales of old and keeping an eye out for any testy reptiles. Along the way we were treated to sips of local wines: Adega, Oliver Twist, Moon Curser and Stoneboat were some of my favourites. Between the warmth of the sun, the plentiful pours and lively chatter, it was all too easy to dismiss the passage of time. Still, I was eager to get to the next stop on our tour.

I'd first heard about Tinhorn Creek when I "met" the ubiquitous Sandra Oldfield over Twitter. She hosts weekly #BCwinechat sessions and is a passionate advocate for the free movement of wines across provincial borders. She is also the president, CEO and winemaker at Tinhorn. (Knowing all this made me really, REALLY want to be on the right bus. Lucky for me, I was.)


Sandra is the definition of down-to-earth, as well as a consummate hostess. She welcomed us to Miradoro, where we sat at long tables and filled our plates from communal platters of paella. Area winery reps floated about, making sure every glass was filled with *something*: Church and State viognier; Platinum Bench gamay; plenty of the Oldfield Series wines, including the exquisite Bordeaux-style 2Bench Red. I felt as though I was sitting among old friends I'd known for years. We dispensed with note-taking and macro shots of our food to laugh, to share and to simply enjoy.

After a great deal of cajoling and a few veiled threats, I dragged myself back onto the bus for the trip to our final destination. The sun was at just the right angle to gild the surrounding vineyards in a coppery glow and cast long purple shadows into the valley. Sigh. Did we really have to go? I gazed longingly at the majestic landscape as we pulled out.

All the tour groups converged at Spirit Ridge Resort for more wine, more food and an exchange of memories and highlights from the excursions. The resort boasted a rooftop patio with allegedly unmatched views, along with a full line of luxury amenities and services, the likes of which I noted for future reference. (MUST. GO. BACK.)

Fresh bannock and flutes of Stoneboat Piano Brut were offered at the front door, while our group waited for the elevator. Bubbly in hand, I made the steady ascent, walked through a dim corridor and stepped out into the early evening light. My jaw dropped (yet again) at the awesome 180-degree panorama of earth, water and sky before me. Because I was sure BC Wine Country just couldn't get any more beautiful. 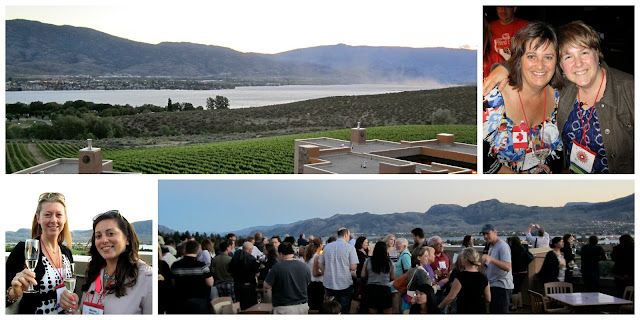