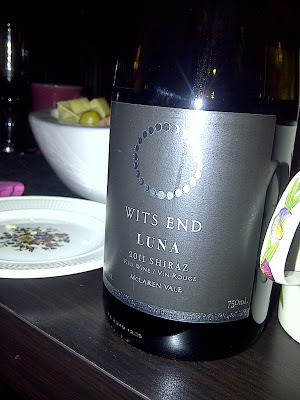 Tonight I joined a few of my fellow Algonquin sommelier grads for a tasting of Australian wines at Jane's house. I dubbed it #janeswine on Twitter, a wineau-inspired version of #janeswalk, which had been taking place all over North America over the weekend.

(Jane's Walk is a series of free guided walking tours designed to increase the average citizen's understanding of, and appreciation for, the architecture, art and cohesive living environment of their own neighbourhoods. Me and the girls opted to enrich our understanding of, and appreciation for, our favourite vinous libations instead. But I think next year I will don the runners for one of the local Jane's Walks and explore what is, I'm sure, an eye-opening side of Ottawa.)

Back to the tasting.


Jane, our delightful host, had just returned from Down Under, hence the theme. She never fails to amaze us with her impeccable hosting prowess, setting out a spread done up Martha-style on pretty platters adorned with flowers. She treated us to shrimp-cucumber-and-cream-cheese pastries; Gorgonzola, mushroom and caramelized onion pizza; and heavenly apricot dessert squares, along with an antipasto plate of cheeses and stuffed olives. Nosh, sip, nosh, sip, nosh, sip ...

I enjoy these tastings, a throwback to class time at Algonquin. Most of these women have taken their studies much further, progressing with lightening speed through the various levels of the Wine and Spirit Education Trust program. Their palates are finely tuned and much more practiced than my own, so I am content to listen to them describe the wines in vivid, pointed detail.

The only non-Aussie wine was the bubbly, a Langlois-Chateau Crémant de Loire Brut (France; 12.5% abv; V996272, $18.95). Blend of chenin blanc, chardonnay and cabernet franc, all of which were grown in predominantly chalky soil, which gave off an unmistakable aroma and flavour along with those of apple, yeast, grapefruit and a subtle nuttiness. Sadly, neither fizz nor flavour lasted long. 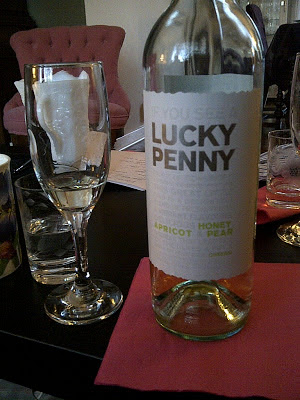 Lucky Penny 2011 White (South Eastern Australia; 11.5% abv; L312189, $16.95) - This was my contribution, a total impulse buy triggered by the lure of the nifty scratch-n-sniff patch on the label. I didn't expect much from this one, and I think most of us were turned off by its flabbiness and lack of flavour. We chalked it up to not being cold enough and moved on. (Editor's Note: We were right. The following evening, the Penny appeared again, this time chillin' in an icy bath, ready to drink. A blend of chardonnay, viognier and pinot grigio, it's sweet and fragrant with a zippy citrus finish. It's uncomplicated, no-fuss wine that will likely be well received on patios this summer. However, had I known it was made by Casella Wines, they of YellowTail infamy, I might not have bought it ... but there ya go.)

Chalk Hill Wines 'Wits End' 2011 Luna Shiraz (McLaren Vale; 14% abv; V311258, $16.95) - I had pretty much given up on Australian red wine for the time being, finding many of them overpowering in both alcohol content and fruit. Despite the 14% abv, the Wits End had a complex profile of chocolate-covered coffee beans, mincemeat, and cloves pierced into orange peel. On the palate, it was spicy—both in terms of flavour and heat—with smooth tannins, medium body and notes of peppercorn and just the slightest hint of ripe red fruit.

We also sampled a Pirramimma 2008 Old Bush Vine Grenache and a Hewitson 'Miss Harry' 2010 red blend (grenache/shiraz/mourvedre/carignan/cinsault), neither of which I took much of a liking to, as they were more on the heavy fruit-bomb side of the spectrum. But as they say, you won't know if you like it or not if you don't try it. I thank my fine wineaux women friends for giving me the opportunity to try as much as I possibly can ... in the most delightful company.