First day of the Year of the Snake, just in case you were wondering. Kung Hei Fat Choi! Both girls brought home Chinese-new-year-themed artwork, including a koi-shaped kite and this impressive drawing of a glimmering gold serpent: 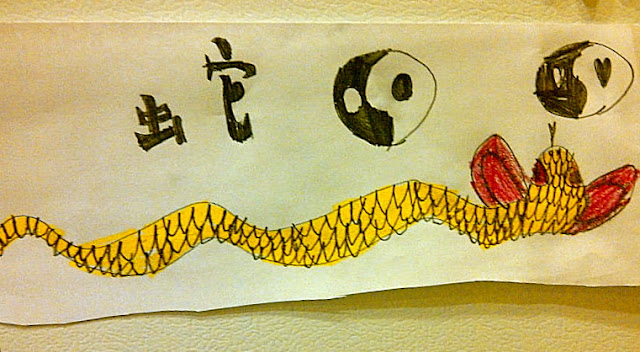 The Doodle was quite taken with the whole concept, and insisted on greeting random strangers with a cheerful (and rather loud) “HAPPY CHINESE NEW YEAR!”

We decided to have a Chinese "feast" of our own to celebrate. I would have preferred to visit the Royal Buffet or to have gone downtown for some dim sum, but we made do with Szechuan satay chicken over nests of vermicelli, with chunks of dragon fruit and rosettes of carrot gracing the plate. (Gotta Martha that up somehow, y'know ...)

I pulled out a Dirty Laundry 2010 Woo Woo Vines Gewurztraminer (British Columbia, V246140, $24.90) to go with the dish. On its own, the wine was fantastic: a structured blend of classic gewurz elements of tropical fruit and a slightly viscous mouthfeel. It wasn’t overflowing with aromas and flavours, it was rather restrained, with elegant balance and poise. The finish had a mild pop of acidity, one that bubbled along on a languid current of lychee, pineapple and grapefruit.

So the general rule of thumb is to pair sweet-ish wines with spicy food so that the heat is muted but the flavours are drawn out, right? This one, however, only served to amp up the spice. Was it the high alcohol content (13% abv) perhaps? Pairing aside, it was a pretty awesome wine, and certainly added a touch of class to our "home-made" Chinese food (thank you, President's Choice Memories Of ...)