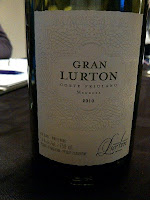 Structure, in wine, refers to the balance between acid and tannin, the weight of it on your tongue, the perception of elegance. Structure, in life, means order, routine, balance. A sound footing upon which to rest or to build. Structure, when it comes (whether in wine or in life) is welcomed.

A few days ago, I was invited by a small group of women (Holly and Eva among them) to join in a private tasting at one of their homes. They had all met during the Algonquin courses; some of them are now WSET-certified. I happily accepted, relishing the thought of an evening of by-the-book wine tasting and grown-up conversation.

The theme was Argentina. The bottles were wrapped in foil (and shrouded in mystery) for a true blind tasting. We took careful notes and spoke in measured tones on each wine's virtues and characteristics. I cannot begin to tell you how enjoyable it was to sit among them, talking shop, trading notes and musing.

I was tempted to get the Fuzion Pinot Grigio/Torrontes as my contribution to the tasting; it brings forth such vitriol from the somm crowd but is so popular among everyday wine drinkers, especially those attracted by the less-than-$10 price tag. Instead, I opted for the Gran Lurton 2010 Corte Friulano (Mendoza, 13% abv, V66829, $19.95). A blend of the northern Italian varietal with chardonnay and torrontes, it kept everyone guessing. Butter, caramel and ripe pineapple suggested an oak-aged chard, but then the fragrant, exotic floral notes threw us for a loop. The glycerine texture was countered by subtle acidity and a stoney, flint-like taste.

Another surprise was the Luigi Bosca 2009 Malbec. Everything about it suggested anything but a malbec: pink-hued, smelling of barnyard and freshly turned soil, very little fruit and a short, unremarkable finish. Malbecs tend to hang with the likes of shiraz, pushing their weight around with fruit-forward might and lots of muscle. This one was the skinny cousin to the beefy heavyweight with which we were accustomed.

I was delighted to get a call recently from Liam Doody, who invited me to judge his students' final projects in his wine-and-food pairing class at Algonquin. It's been ages since I walked thru those doors; I missed this place! The unmistakable funk of dregs fermenting in the spit sinks; the fat, drunken fruit flies buzzing in sloppy circles around the glasses; grape geeks chattering in their own complicated vocabulary.

Being on the other side of the learning process was both odd and really fun. It was me and one other blogger, David Flewelling, of Dave's Domaine. Our task: taste each dish, sample the wine paired with it, and give the entirety a medal of bronze (match doesn't add to, or detract from, either); silver (match enhances enjoyment of wine or food, but not both); or gold (totally-kick-ass, knock-your-socks-off match made in heaven.) We agreed not to be too harsh or strict in our decisions; having been on the receiving end of those coveted medals once upon a time, we knew how much work went into this particular final exam. 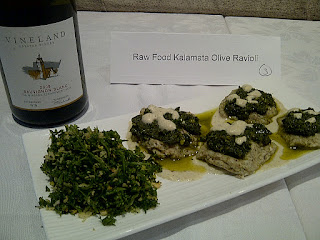 We gave out one gold: salmon with a tarragon mustard sauce paired with Joseph Cattin Hatschbourg Grand Cru 2009 Pinot Gris (Alsace). Not that the other dishes weren't good; on the contrary, there were some drool-worthy numbers for both the wines and the food. I particularly liked the caramelized onion and bacon tart (it's got BACON. How can you go wrong?) and the "raw food" kalamata olive ravioli. And my favourite wine of the night was, hands-down, the Cupcake 2011 Red Velvet (California), which smelled and tasted just like a fresh, moist slice of that same luscious dessert.

It's those evenings of structure that often make the days of chaos that much more manageable. I'm grateful for those times, and for the people who have welcomed me in to join them.