A pint or two around town 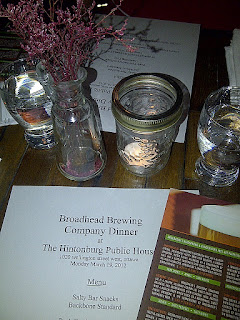 I'm not much of a beer drinker, and have absolutely no idea how to properly "taste" one. (Is there even an aroma wheel for that? Oh, wait ... there is.) I know there's hops and barley and water, and that it goes through a fermentation process. I know that, after yard work, a close game on the ball field, or a kid's birthday party at Cosmic Adventures, a beer goes down really well. I even know that a beer expert is called a cicerone.


First beer I ever tried was Labatt 50 (thanks, Da!) At university, beer was limited to watered-down 'domestics', cheap stuff downed at rowdy keg parties and during rounds of Century Club in residence. (Once while on a date, the guy bought me a Guinness. I took one sip and just about choked. But considering I didn't get too many dates back then, I gulped it down anyway. With a smile.)

Thankfully, my tastes have broadened since those days of immature swill-swigging and I have fully embraced the local microbrewery culture with enthusiasm.

Broadhead Beer: Hubby and I recently went to The Hintonburg Public House out in West-Wellie-Hinton-Boro for a five-course beer tasting hosted by this new brewery. It was a great starting point for a noob like me: Microbrewery 101, if you will, in a relaxed, fun atmosphere.

The best pairing of the night was a mammoth Mariposa duck breast confit with caramelized root veggies and cranberry mustard matched with Grindstone Amber, a medium-bodied ale with a melted caramel flavour. The sweet-crisp skin was practically candy, and the tender meat fell off the bone. Dessert was matched with the Dark Horse Stout, which surprised me the most. Memories of that pint of Guinness still lingering, I hesitantly took a sip and marvelled at its bold espresso notes. It had more coffee to it than the coffee brownie we chiseled through, glazed with malted chocolate pudding and garnished with pools of banana puree and molasses.

All in all, a pretty tasty evening. Kudos to the chef(s), and to Broadhead co-owners Josh and Jason for teaching me about IBU levels and how to properly toast barley.

That went so well, I figured I needed to try more local brews. I'm already a big fan of Kichesippi's Natural Blonde and Wuchak Black, and cherished the rare opportunity to sample both in one blend. I need to get over to the brewery and refill my growler soon.

Mill Street opened its Ottawa digs late last year and the crowds are still at max capacity almost every night of the week. (Read: good luck trying to get a reservation.) I have yet to see the place itself, but I have enjoyed their easy-sipping Original Organic and Wit beers, and loved the Coffee Porter, brewed with actual coffee. (Me - dark beer. Again. Who knew?)

While out with The Moms at Paddy's Pub, I tried out Ashton Brewing Company's Amber and Harvest Brown ales. They were both excellent, with plenty of complex flavours accompanied by medium-weight body and a pleasant finish. That's a place that will be worth the drive this summer.

Other spots on the map: