This last week has been super-busy, and it doesn't look like it's going to slow down any until mid-February. Not that  I'm complaining. "Oh no, I have to have another night out where I have to drink wine and eat amazing food and hang with really cool people. Such hardship." (Yes, I can hear a whole orchestra of teeny-tiny violins playing a dirge for me.) 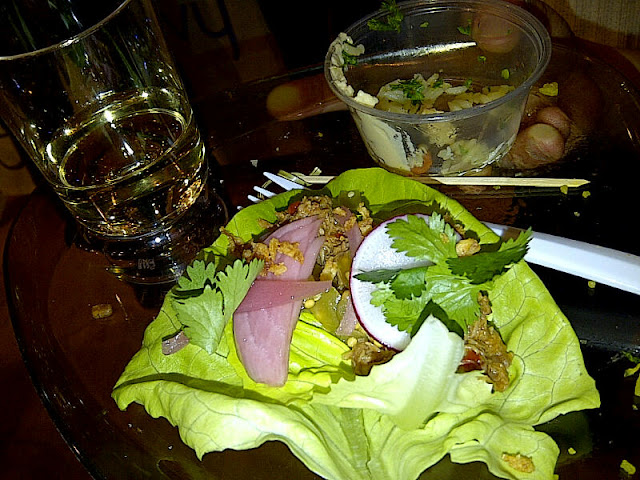 Thursday was the annual Taste in the Glebe, smack-dab in the middle of Ottawa's chic hub of coffee bars, quaint shops and old houses refurbished for modern living. Imagine a smaller (not nearly as packed and much more laid-back) Wine and Food Show. All for one price. Now we're talkin'.

Wines, beers and bites of all kinds were served up by local and local-ish purveyors. Dish of the night was from SideDoor Restaurant: braised and pulled lamb shoulder with radish, green tomato relish, cilantro and picked red onion all rolled up in a Boston lettuce leaf. Texture-wise, the crunchy veg vs tender lamb gave the taste buds a thorough workout. Just spicy enough to warrant a good quaff of off-dry Riesling from Huff Estates.

Wine of the night was Sandbanks 2010 Shoreline, a blend of Riesling, Chardonnay, Gewurztraminer and Pinot Blanc. I had a chance to chat with SB's John Squair, who poured us a little bit of everything to try. When asked about the gorgeous salmon colour of the rosé, he said the staff "stood in the kitchen with the wine on the counter and just kept pouring in cab franc until we all yelled, 'THAT'S IT!'"

See, that's what I love about these intimate gatherings. Getting a chance to hear the inside jokes and back stories, cautionary tales and 'holy shit!' moments from the people working on the front lines, from bud break to bottling. Can't be beat.

Switch 180 degrees to Saturday, when we did a cross-border jump into Aylmer, Quebec, for Winter'Ales 2012, at the Chateau Cartier. 'Less formal' is an understatement, when the attire was mostly toques, Canada Goose jackets and fur-topped boots. Necessary for a midwinter beer tasting in - 20⁰C with the windchill.

Inside, the party was in full swing. Eardrum-busting bass from the techno music competed with the din of eager beer-swillers. On tap was everything and anything, from microbreweries throughout the Outaouais and beyond. I cursed myself for not taking the Algonquin beer course before this, as words like 'stout', 'IPA' and 'scotch ale' left me clueless as to what to order. Not disappointed, though: a Czech-style pilsener from Brasserie Tchequebec, a creamy caramel Boréale Cuvrée, and a citrus-streaked blonde from D'Atchoume were all tasty examples of what craft beer should be. 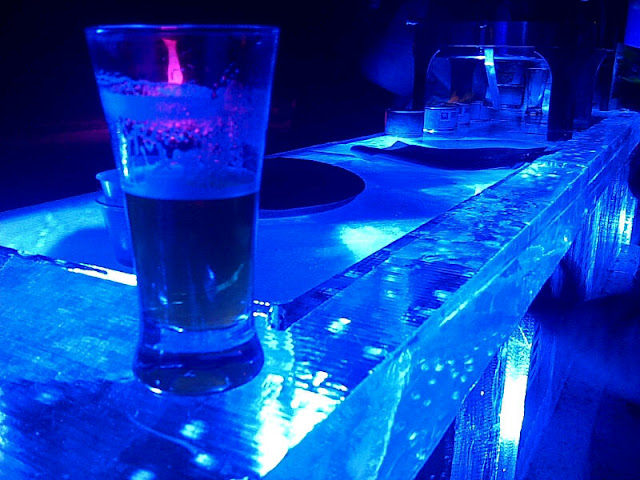 Food offerings were few, but they made up in quality what they lacked in quantity. Foie gras poutine? Yes, please. Smoked gouda risotto? Don't mind if I do. Bacon-wrapped scallops? If I must.

Outside, the crystal-clear night sky was dotted with orange cinders drifting up from the massive bonfire. Revellers huddled around it, with cups of warmed Brasseurs du Temps Messe de Minuit, a brown ale reminiscent of gingerbread/Christmas-cake/apple cider. Interesting, to say the least. Don't think I'm much for warm beer, no matter how cold it is outside. But the setting was spectacular, rather other-wordly in its deep indigo glow, and the camaraderie around the fire warmed the soul, even if one's fingers were blanched from frostbite.

By that point, the crush of human flesh inside got to suffocating proportions; apparently, the food and beer were running out, too. Time to call it a night. But not before grabbing nachos and French onion soup at the Brasseur's Montcalm street location just down the road. That may just become my new favourite pub.

To read related tweets from my thread, @2ndferment, search for #tasteintheglebe and #winterales2012.