25 Years of Wine and Dine in Ottawa

When a gig this special hits 25 years, you know it's a keeper. And now they're going to make it better? Sweet.
It was Wine and Food Show time again this past weekend, and since I missed last year's on account of my "delicate condition", I was eager to flex my lazy olfactory nerves and taste buds a bit.
Celebrating its 25th running, the Show's had quite the face lift. It's settled into the digs at Lansdowne quite well, with improvements made to acoustics, layout and traffic flow. The crazy line-ups were pared down through a day-pass ticketing system, and foodies had more demos and samples in which to indulge. You could even get a refund for your unused sampling tickets (pffft - like that ever happens!)

Ah yes, the regulars were still there: Big Daddy's, Wakefield Mill, Petit Bill's Bistro (thanks again for the lobster poutine, Randy!), Haileys Heavenly Cheesecakes, Milestone's. Agency reps from Lifford, Select, Philippe Dandurand, Vincor and Churchill had plenty to pour. Wines of Ontario borrowed a page out of the California marketing book by creating an attractive main hub of wineries under one banner, kind of a one-stop-shopping centre for local wines.
Plenty of fresh faces on the floor, too, including Kichesippi Beer, Must Wine Bar and Manotick's Main Street Cellar. The latter did up an exquisite sampling plate of butternut soup, bison tartare, wasabi sweet potato salad and pumpkin cheesecake. That, with a generous pour of Kichesippi's Natural Blonde, was a meal in itself.
On a whim, I decided to give the Tasting Alley a try. This exclusive, "premium" tasting comes with the full VIP treatment - separate entrance, separate coat check, a decadent cheese tray provided by Prince Edward County's Fifth Town Cheeses, and a plethora of top-end reds, whites, dessert wines and sparklers. I was thrilled to see a large contingent of Ontario winemakers present, including newcomer Colaneri, which just opened its doors over the Labour Day long weekend.

Even the usual Friday night party crowd didn't deter me; the mood was festive instead of predatory. Everyone was having a good time. (Mind you, I left around 8 pm, so who knows how far downhill things went after that.) 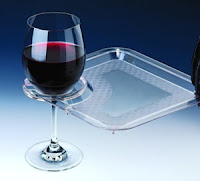 Joan Culliton, the Show's producer, promises a superlative experience awaits us next year, when she kicks it up a notch: BAM! A five day festival of wine and food in the National Capital. Now THAT'S what I'm talkin' about ...
Oh, and a heads-up to CA Paradis: you owe us. We got stopped every 10 feet by people asking about our handy-dandy tasting plates with the wine holder attachment, the ones you sold at the Show in 2004, remember? Since you got a lot of free press out of us, we figure remuneration is only fair ... maybe in the form of a free set of Riedel glasses? Or passes to next year's Show? We'll send you our bill ...