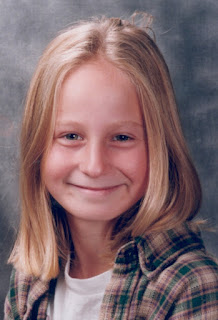 In 1999, a little girl named Sandrine Craig died in a bus accident. She could have easily left this world as a tragic statistic, but instead lived on not only in memory, but as a giver of life to six other people ... because she was an organ donor.

"I think this happened to us because we were supposed to do this. All the people who are involved have been groomed their whole lives to do this. It gives Sandrine's life, and mine, a purpose. If she had been buried with all her organs, it would make no difference to me today, but it sure made a difference to those six people."

Sandrine's legacy not only helped the lives of six people, but offers hope to the over 3,000 people waiting for transplants in Canada. They wait for kidneys, for lungs, for hearts. They wait for eyes to see. And the cure is there to be had.

That was part of the first article I wrote in 2000 for Sandrine's Gift of Life, an awareness campaign launched in her memory to bring the important message of organ donation to Canadians. After reading about Sandrine in the Citizen sometime around the first anniversary of her passing, I jumped on board as a volunteer writer for the campaign. I met Diane, as well as several other amazing people: transplant doctors, organ recipients, people on the waiting list, parents, spouses, children ... all of them painfully aware of the desperate need for organ donors.

With every interview and article, I learned some incredible truths: eight lives can be saved through organ and tissue donation, while 75 more lives can be enhanced, allowing recipients to enjoy a better and more productive quality of life. More than 1700 recipients are waiting on Ontario's transplant list. Yet most people are unaware of how organ donation works, or are unwilling to donate, due to a lack of knowledge on the subject. The more I learned, the more I shared with family and friends, and the stronger my resolve became to educate others.

It's been a decade since Sandrine left this world, a decade since her gift of life was shared with six other people. This past Sunday, Diane, Kenny and a crowd of friends and family gathered at Pinecrest Cemetery to remember Sandrine. Unfortunately, I didn't hear about it until days later, and so wish I had been there. I never knew this little girl, but felt so close to her and her family from working on the campaign. Now, with a daughter of my own, I find her story ever more touching and awe-inspiring. All the more reason to rejoin the movement and spread the word.

For more information, and to register as a donor, please visit the Trillium Gift of Life Network, and let your family know of your decision. Or check out this fantastic, youth-oriented site at Recycle Me. You can make a difference in someone's life. It's time to stop burying the cure.

Cellared under: on writing, un-wine-d