My name is Bethany, and I will be your sommelier this evening ... 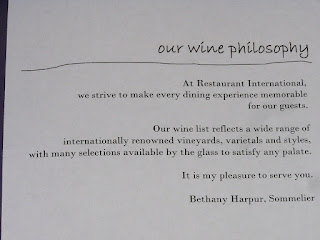 The service exam. The culmination of seven courses’ worth of tasting, swishing, spitting and noting. I have dreaded this moment from the time I first read about it in the college flyer. So we’re talking four years of unimaginable stress, building with the completion of each course. I had thoughts of stopping after the end of Old World Wine, just so I wouldn’t have to endure the service exam. Me? Stand up in front of a bunch of people and do something? ANYTHING? This from the girl who breaks into a sweat just ordering a latte at the Second Cup drive thru.

But I knew, deep down inside, that “graduate of the Algonquin College Sommelier Program” was a necessary line on my resume if I wanted to get my foot in the door of the wine and food biz. Not to mention how cool it would look on a business card. So I registered right after Old Worlds was done and braced myself for the ensuing nightmare.

The service exam comprises a panel of judges seated at a table as though they are guests in a restaurant. You are, for all intents and purposes, their sommelier for the evening. Your job is to greet them warmly, educate them on your wine list, and open and pour a wine in the traditional style. (I kept waiting for them to add something like “all while balancing on a unicycle with a flaming Hula Hoop spinning at your waist.” In my mind, it couldn’t get any worse.)

My worst fear was having Rod Phillips at my table as one of the judges. That, and spilling wine all over the place. When Saturday morning came, I was relieved to see the first was a no-go; the second I left to one of my classmates (who executed a spill so grand, and with such panache, it will go down in college history. I think we’re going to elect him as valedictorian. Maybe get his valpolicella-stained liteau framed as a souvenir.)

Mere moments after introducing myself, I was blindsided by a left-fielder question: “What are your signature cocktails?” I blinked once, uttered an “uh” or two and then prattled off a fictitious list of beverages, advising them that many of the so-called “martinis” were more Froot Loops than gin; would they prefer a classic martini instead? Yes? And might I recommend a glass of the Poema Cava to start the evening off? Sparkling wine doesn’t need a special occasion … it goes well with everything!

(Did I really just say all that? I walked away from the table, stunned, and asked my classmate, “Where the hell did that come from?” He shrugged, staring with the same deer-in-headlights expression I’m sure we were all wearing that morning.)

Round two: appetizers. After I presented the table with their wholly imaginary cocktails, we walked through the starters together, me describing both a white and red (or beer, or sparkling) for each. Something for every palate. Like it says right in the front of my (rather smart-looking, if I do say so myself) menu. That self-same menu I was cursing the night before, as I glued, printed, re-printed and sewed pages together until stupid o’clock in the morning. I am not joking.

Round three: mains. I was a bit more confident with my pairings now, but still speaking / walking as though in some surreal fog. My nerves were shot and I was measuring the distance between my table and the door to see how long it would take me to escape. But on the surface, I (apparently) remained calm, cool and collected. I was gracious, courteous … and amusing. “What’s a verjus? That’s an excellent question. As far as I know, it’s a fancy word for sauce.”

(Again, my inner voice screamed, “TELL ME YOU DIDN’T JUST SAY THAT!” Oh well, if I can’t be right, I might as well be funny.)

I was a bit disappointed at first that they didn’t order the venison, so that I could blow their minds with my off-the-wall pairing suggestion of the Jackson-Triggs Chardonnay, but in retrospect, my status may have taken a nosedive with that kind of ballsy manoeuvre.

And then it came time to open the wine. I know I was supposed to be this chill, sleek-talking conversationalist while I deftly de-foiled, uncorked and poured. Instead, I kept my head bent in concentration and performed in utter, deafening silence. Three sets of eyes burned through me as I slid the knife up under the edge of the lip, peeled away the foil in one smooth movement, and twisted the screw in without a drop of sweat.

Wouldn’t you know it, the bloody thing cracked. Straight through, level with the opening. Did I lose my shit? Not even. “Seems this cork is giving us a bit of trouble tonight,” I smiled, while gently wiggling the whole thing out with my thumbs. Nothing broke, no cork in the wine. All good. No bad.

My swift recovery was followed by a dripless execution of the pour. Having then made my way around the table, I nestled the bottle safely in my liteau, gave a polite bow to my guests and took my leave. And then waited. And waited. If they were satisfied with my performance, I was golden. If they weren’t, they would order dessert as an additional test of my skills. (“Bring it on!” my cocky inner voice bellowed. “Have I got some pairings for you … wait’ll you try the pear sorbet with the Williams and Humbert walnut brown oloroso! It’s KICK ASS!”)

Randy came out with a smile and a nod. I was free to go.

I wobbled my way back into the holding pen and rose my arms in victory. I survived what I had conjured in my mind to be more excruciating than anything the Spanish Inquisition could dish out. I not only survived it, I SMOKED IT. I reeled with a runner’s high of accomplishment and adrenaline. I’m done.

Those of us who were finished slouched in our chairs like a rack of spent gym towels, while those still waiting twitched from the stress. But we all went in, did our best, and returned with equally sated expressions of relief and triumph.

At the post-exam reception held by the Guild, we mowed down on club wraps and Timbits, and greedily hovered over the leftover wine. “What’d you bring?” “I brought the gewurz.” “That viognier is stunning, you should really try it.” “Who drank all the shiraz??” We laughed and toasted ourselves: we were graduates now. Then we gabbed about who we would bring (and what we would wear, of course) to the grad dinner. Never mind that the youngest person there was well past high school; you’d think we were a bunch of tweens giddy over the prom.

I bade my fellow sommeliers farewell and headed out. On my way down the hall, I met up with one of the judges from my table. We shook hands and he congratulated me on a successful service. “Have you ever worked in a restaurant before?”

His jaw hit the floor. “Well, you did pretty damn good for someone who’s never done it! Great job!”

That’s all I needed to hear.