Even better than birthday cake 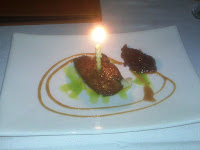 It seems like every time I read a review about a new restaurant opening in Ottawa, the chef/owner is “formerly of Domus Café”. Well, no wonder. These guys can cook.

As part of Hubby’s birthday celebrations (the operational security of which I managed to keep rock solid this year!), we took in dinner at Domus on Saturday. This intimate space in the Market reminds me of someone's cucina; more "at home" than downtown upscale. Smooth, clean lines in neutral tones, walls hung with a few colourful canvases and maps of Canadian wine regions. A cluster of two- and four-top tables are arranged between the open-concept kitchen and a bank of windows overlooking Murray Street. Wines, aged vinegar and Mason jars of preserves line the shelves behind wrought-iron gates of a distinctively Old World style.

I agonized over the menu. I’m in the process of trying to lose a few more stubborn pounds that will put me within arm’s reach of my weight loss goal. But everything looked so good. Hubby, gawd bless him, reminded me that birthdays are special occasions – we don’t eat like this every day.

So I ordered the foie gras as an appetizer, followed by the seared tuna special. Hubby went with the pearled barley and wild rice risotto, and the trio of pork (tenderloin, chorizo sausage and pork belly). His risotto wasn’t quite my cup of tea; the barley threw me off. But the nutty, earthy flavours of the wild mushrooms went well with the Flat Rock Cellars 2007 Pinot Noir Hubby sipped on.

The foie gras …dear gawd. Thick slices of a fist-sized serving on a puree of potatoes, garnished with a sunny side-up quail’s egg oozing yolk. I had it with a glass of Huff Estates 2007 First Frost Vidal, a semi-sweet version of its icewine cousin that had a firm spine of acidity to balance the honeyed apricot flavours and cut through the weight of the dish. It was a better match than Sauternes. (You heard it here first!)

Hubby looked longingly at my plate, regretting his choice of starter. Out of sheer pity, I fed him forkfuls of the almost-liquid concoction and watched his eyes roll with pure rapture. “You know what, I don’t need a cake for my birthday. Just set me up with a slab of that with a candle in it.” Note to self …

The seared tuna was a welcome palate-cleanser after such a heavy appetizer. While more medium than rare, I liked its chewy texture and subtle seasoning. The accompanying sweet beets were delicious, but I passed on the fingerling potatoes, which were overcooked and flavourless. Hubby’s pork was exquisite; a sizzling, crispy “bridge” of pork belly connected the Twin Towers of tenderloin and spicy sausage. This he had with the Stratus 2006 Wild Ass Red (which won the Pepsi challenge against a Chateau des Charmes 2004 Cabernet-Merlot, thanks to our generous and attentive server.)

And wouldn’t you know it, what should appear on the table just then, but a lovely, perfectly seared portion of foie gras, lit up with a birthday candle? And brought with another glass of the First Frost, on the house? Not only do the chefs excel at Domus, but the service is top-notch -- the kind that changes a meal into an experience. Thank you, Sandra!

Cellared under: food, ottawa, quaff this