They should call it the Backbreak Grape, really

I spent the last two weekends immersed in all things wine down in The County (of the Prince Edward variety). The first was spent leisurely coasting from one tasting bar to the next, sipping all sorts of lovely pinot noir. The second was spent picking pinot noir ... not quite so leisurely, I assure you. But a great time nonetheless.

During a stop at Closson Chase, I got word that Norman Hardie was harvesting the following weekend, and needed people to help. My curiosity was piqued - where could I sign up? I mean, what better way for a wine lover to fully appreciate what goes in the bottle than to be there when it starts out on the vine? I was more than eager to "be one with the grapes".

Six a.m. came early that Saturday (I'd say "bright and early" but did you know there's no sun at that hour??) but I was raring to go. I was introduced to Norm and his team, given a rough run-down of how things worked, and before long, I found myself perched on the back of a tractor as it cruised down the first row of vines. The morning was cold and foggy, the vineyard rolled away on all sides in a spectacular view worthy of a cinematic nod from the Academy, and here I was, about to pick fruit that would become the Nectar of the Gods. It doesn't get better than this, I thought. 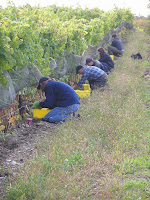 Yeah, well, after about the third or fourth hour of picking, the bloom was definitely off the rose. I was one of a long line of automatons, sticky with grape juice, sweltering in the sun and being swarmed by flies and yellow jackets as we crouched over the gruelling task at hand. Grunts and groans were heard throughout the vineyard as folks stood up to stretch, their knees and lower backs screaming in protest. With the exception of giving birth, this was the hardest day's work I had ever known. But I loved every minute of it.

We laughed, we exchanged life stories, we collectively wept at how many of the grapes were lost to botrytis. Clippers flew, bunches were tossed into bins that were gathered up and carefully inspected by Norm himself. Up one row and down the next, until the sun was well past the yardarm and we were called in for lunch. We gorged ourselves on spit-roasted pig, piles of salads and countless bottles of wine laid out in a feast of thanks for all our hard work. Stuffed silly, we sat smiling in the sun, feeling quite proud of ourselves and daydreaming about what the 2008 vintage would be like in our glasses. 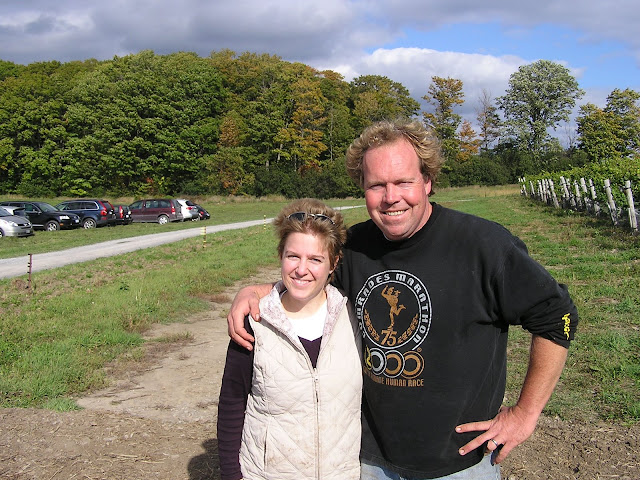 I'm already signed up to go back next year. Hopefully by then Norm will have taken our advice and invested in a massage table and RMT for post-harvest rubdowns.

Quaff this the next time you're in the County:

Norman Hardie 2007 Riesling - Beamsville fruit. Nose of smoky flint, with a crisp body and all the flavours of the terroir (think gravel and river stones). Long, subtle apple finish.

Closson Chase 2006 Niagara Oak-aged Chardonnay - I liked the taste better than the nose on this one. It smelled a bit varnish-y, but on the palate it was sumptuous sweet fruit and creamy butter. Quite well balanced, not too much overpowering oak.

Closson Chase 2006 Niagara Pinot Noir - Loved this, loved this, loved this. Especially the nose. Raisins, plums, herbaceous notes and DILL. I'm talking open-your-jar-of-Bicks-and-take-a-whiff dill. It's there again in the flavours - in a good way - along with dried cranberries, raspberries and a bit of minerality. Long, lingering finish followed us back into the car and out onto the road. Thank you, Lynn and Shirley!

Sandbanks 2006 Baco Noir Reserve - Deep, opaque garnet. Cherry and chocolate nose, following through in each mouthful, along with a light touch of pepper and cinnamon. Acids and tannins are well balanced, letting the fruit show off.

Sandbanks 2006 Marechal Foch Reserve - Pronounced "mah-REY-shall fosh". All sorts of lovely aromas and flavours in this one: blackberry, cherry, jam, dark chocolate. Tannins are moderate for this type of varietal, great weight.