In the words of Mamma Yamma: we're having a FOOD MOMENT!

I’m starting to think we have a culinary protégé in our midst. The Doodle has become our Great Big Helper in the kitchen, eagerly Cheez Whiz-ing toast, stirring yogourt and drying lettuce in the salad spinner. One time she actually made chicken fingers. Next thing you know, she’ll be sautéing julienned veggies and braising osso buco like a pro.

The second she hears the fridge open or the clink of silverware, she shrieks in giddy delight. “I WANT TO HELP!” Hauling in her step stool, she climbs up and starts getting into whatever’s on the counter. If she’s not doing that, she’s making “crazy egg salad” with her plastic Easter eggs or cooking up a pot of soup with an empty bowl and a wooden spoon.

Last night it was cocktail hour on the back deck while I BBQ’d. Everything was on the rocks – literally. The Doodle lined up her plastic cups in neat rows before pouring in some invisible concoction from her watering can. In went a handful of gravel, then one or two leaves pulled off a plant growing under the steps. She gave the whole thing a quick shake, took out the leaves (clearly only for a hint of flavour) and handed me the cup. “Want a cookie?” she asks, and tops up my drink with another rock. 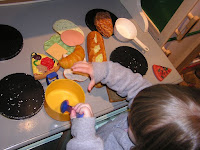 Let her loose in a play kitchen, and all manner of desserts, beverages, lunches and snacks will issue forth, all day long. Heck, she doesn’t even have to be in the kitchen; she’s rather adept at making pink cupcakes magically appear out of the brick wall in the backyard of Grammy's house. (Just don’t ask her for purple cupcakes – you eat what’s in front of you, OK?)

She’s obsessed with this month’s Martha Stewart Living, which is all about autumn and Halloween. The second she gets in the door, before she's even taken off her coat, she’s asking me to “read the pumpkins” to her. There is much ooohing and ahhing over the endless array of glorious gourds, along with comments on the recipes. “That sounds yummy!” she chirps, pointing at a picture of steak frites. Thanks to Martha, the Doodle now knows how to say tartare, too.

I just wish this enthusiasm would spill over to dinnertime. That fascinated chef suddenly becomes the pickiest toddler ever, turning down mashed potatoes, refusing bread if it’s been buttered, and wailing for more milk to wash down the half-chewed chicken in her mouth. I guess the pretend stuff tastes better.