The dining room's in the vineyard ... come on in

On our first trip to Niagara, we had dinner one night at Jack Astors. We were tired, a little burnt out from tasting so much wine (and we were only on day two!) and didn’t want to waste any money on food when it could be spent filling up the cooler with more bottles. So cheap eats it was.

When we got back to our hotel, the manager asked about our vacation thus far.
“Where did you go for dinner tonight?”
We cast puzzled looks at each other. “Uh … Jack Astors.”
After he was done berating us for our obvious lack of taste in fine dining, the poor guy looked like he needed a few drinks himself.
“Haven’t you been to a winery restaurant yet?”
You mean these places do FOOD, too??

We've since seen the error of our ways and have enjoyed many an excellent meal throughout the region. This time around, we opted for Hillebrand, home of the first winery restaurant in Niagara, which had recently undergone a multi-million-dollar facelift. The dining rooms and inviting patio were sleek and Zen, giving a nod to nature with rough-hewn walls of stone, gurgling fountains and a bank of windows overlooking the sun-soaked vineyards.

I agonized over the menu, forcing our infinitely patient waiter, Joel, to come back several times before I’d decided on a mix of surf-n-turf in three courses.

The Fundy Bay scallops were poached to gently yielding, rubbery doneness. The Tuscan-red drizzle of sundried tomato oil thick with chunks of lobster and chorizo sausage added a flick of spice for contrast.

Despite my purist preferences when it comes to oysters, I gobbled up the lobster “BLT” that topped each half shell without hesitation. The minced lobster meat, slice of double-smoked bacon and grilled cherry tomato gave the briney mollusks a nice punch.

The Doodle would have been thrilled with the entremets: a tiny popsicle of Riesling-infused strawberry granite. POPSICLES FOR DINNER? Get out of town. 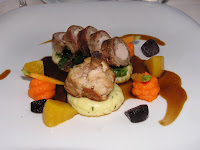 But OMG, I haven’t even gotten to the good part yet. The rabbit arrived in all its glory, with both shank and loin resting atop a low rise of rustic mash and wilted spinach, playing host to a court of yellow and purple Chioggia beets. The shank was a tad dry, but the hearty, bacon-wrapped loin was flavourful and succulent.

The wines, however, were a disappointment; the “winemakers choice” of selections allegedly hand-picked by Darryl Brooker himself didn’t do the food proper justice.

The Trius White was unremarkable, served too cold to really appreciate any flavour it might have had. The Brut’s syrup-and-bubbles didn’t pair well with oysters, although I did enjoy sipping it between courses as a palate cleanser. With the rabbit, the “Showcase” 1997 Cabernet Franc was far past its prime, having lost its fruit—and most of everything else—sometime earlier in the millennium. (This was one of those times when I should have followed the whole “nothing-past-five-years” policy for Niagara wines.)

But Joel, having by now talked shop with me at length over the finer points of sommelier education, wasn't about to let me down. He generously poured samples of both the sauvignon blanc and cabernet merlot from their Artists' Series, which I thought were much better suited for the latter courses of an otherwise decadent meal.

Dessert – a cookie-cutter cylinder of flouffy, chocolate-caramel cheesecake with a to-die-for pecan crust – was slightly sullied by cherries soaked to mush in cabernet. No matter, the espresso was flawless and the miniature caramel fondue that arrived with the bill more than made up for any shortcomings. Joel's grace and good humour, along with the breathtaking vistas, covered the rest.
A far cry from Jack’s, for sure.