An amazing thing happened today. The sun came out.

The snow melted, the gutters chuckled with unbridled gushes of water, the birds sang out their twitterpated songs … and we found the barbeque.

We knew we had one somewhere in the backyard, but today I finally found it after some determined digging and a desperate need for singed animal flesh. Lo and behold, there it was, under two feet of the heaviest snow I’ve ever moved (that drift on the right of the photo is thigh-high ... STILL. And that's after some MELTING.) 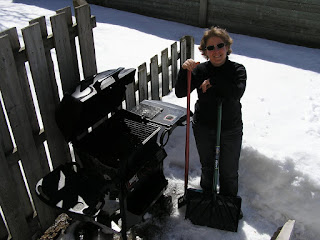 This has been a LONG winter. I’ve never seen so much snow. At first (like, somewhere around Christmas) it was pretty. But when the end of March came around and it was STILL SNOWING on top of the six-foot drifts we already had, it’s just wasn't fun anymore.

Some Ottawans were actually disappointed that we didn’t break the record of 444.1 cms. Personally speaking, that’s a record that can remain unbroken, thank you very much.

In celebration of this glorious, REAL day of spring weather, we feasted on Q'd pork tenderloin, grilled fingerling potatoes and creamed spinach (yes, even Hubby ate it!) We enjoyed a 2005 Jaffelin Bourgogne Aligote with it, which was so incredibly smooth, refreshing and sweet, I was rather disappointed when the bottle was finally rung out. I didn’t have much time for tasting notes, given that I was too preoccupied trying to get the Doodle to eat (stop wearing your bib on your head … put that back in your mouth … no, you can’t have dessert … get your hand out of your milk glass) … but I'll do my best:

The nose was a ton of apple and floral, with that same crisp apple on the palate, accompanied by tropical fruit and caramel. The BBQ sauce with the pork was too sweet and killed the wine, but the pork on its own, as well as the spinach, paired quite nicely with it. And it was lovely to sip on during the 1,000th viewing of Cinderella, after dinner.

Welcome back, Spring. We’ve missed you.