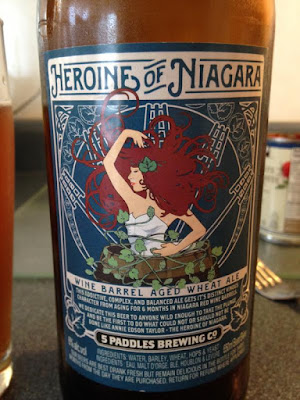 It's Ontario Craft Beer week! Not that you really need an excuse to try out the wide range of hoppy beverages made by passionate local brewmeisters, but this is a good one.

We've had a good year so far when it comes to beer. I signed Hubby up for the Savvy HipHops beer-of-the-month club last Christmas (aren't I a good wife?) Every month since the early weeks of snow-bound January, we've been treated to brews from all over the province: ales and IPAs, porters and stouts, gruits and saisons, and one-offs done with everything from peppermint to cocoa nibs. It's been a bonus learning experience for me, and an eye-opener to styles I never thought I'd enjoy.

So far the big winner has been Heroine of Niagara, a wheat ale done by Five Paddles Brewing that's been aged in spent wine barrels. Wisps of merlot come through on the nose, with a palate that's smoky-sweet and a bit tart on the finish. I kept saying "oh.my.GAWD" with every sip.

(By the way, I don't know enough about beer to write credible tasting notes, so if you want to read better ones, check out what the Savvy Brew Crew has to say. And if you're as clueless as I am when it comes to words like sessionable or IBU, the Beer Advocate has an extensive glossary of terms.)

Here are some of my other faves:

Strathroy Brewing Company (Strathroy)
Lockstock Ale / Independence Pale Ale - Both of these reminded me of the orange peel-coriander of white beers. Light, flavourful and crisp, they go down (a little too) easy.
Smokin' Cannon Stout - Modeled after traditional Irish stout, this is all roasted coffee bean, caramel and peppercorn. (I like Monique Ippolito's suggestion of pouring it over ice cream!!)

Stay tuned ... there's another six months' worth of beer to be tried!