A few times a year, Hubby gets sent off on business somewhere in the world (while yours truly pulls Single Mom Detail ™ at home). In between never-ending meetings, chats with bigwigs and the like, he ventures out to discover something new about where he is. This is his latest adventure ... 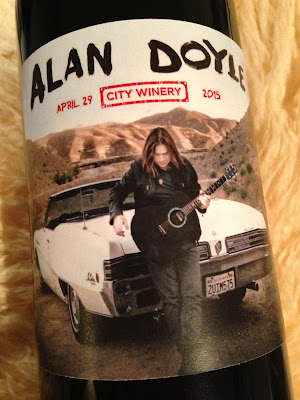 On a recent trip to New York, I made my way over to the trendy SOHO/West Village neighbourhood to visit City Winery NYC, the only fully functioning winery in Manhattan. It also doubles as a restaurant and live music venue. That night’s featured performer was Alan Doyle, former frontman of Great Big Sea, who was touring to promote his recently released solo album So Let's Go. I figured this was as good a place as any to have a full-fledged “New York moment” complete with celebrity cameos, strangers that become part of a one-night entourage, and a bone-deep contentment brought about by great food, great wine and great music.

Despite its size, City Winery evokes the warm and cozy feeling of a local pub, without the close-quarters seating common at other New York establishments. Tables of varying sizes are arranged throughout the two-tiered layout, providing an excellent view from any vantage point, along with a row of individual barstools lining the wall at the back. Along one side wall of the vast space, a glassed-in stack of wine barrels shows off future vintages.

For the gig, it was reserved seating everywhere. Since I was going solo and buying tickets the day before, I was faced with a choice of claiming a barstool at the back of the room or claiming the last open seat at a table of four at the left side of the lower level. I rolled the dice in favour of a closer seat and took the spot at the four-top, hoping that an enthusiastic group would join me.

I arrived early so that I could have dinner before the show. I opted for the charcuterie, which included duck sausage, chorizo and prosciutto with baguette and olives. While the portions were smaller than I expected, all of the selections were delicious. To accompany the meal, I selected a Hyland Estates 2014 Pinot Noir (Oregon), which was dispensed from a tapped barrel rather than poured from a bottle. Its colour was a deep garnet, with a subtle nose that lulled me into complacency before revealing its luscious and incredibly well-balanced notes of red fruit and earthiness, with mild acidity and tannins that showed off its depth. It was an excellent choice.

Shortly after my meal, my three table-mates arrived and instantly allayed any fears I had about a lack of enthusiasm. Morgan, Cathy and Scott, from Philadelphia, Maryland and Ohio, respectively, had met at Cornell University where they discovered Great Big Sea and became huge fans. Tonight’s show coincided with Cathy and Scott’s fourth anniversary, so they and their best man were already in a celebratory mood. They were thrilled to learn that I was Canadian and that I had once met Alan Doyle at a event planners' conference. The four of us became fast friends over quite a few glasses of wine and Blanche Bruxelles witbier.

Before the show began, I learned that it was customary for City Winery to issue a wine with a personalized label featuring the artist of the night. You’ll be happy to learn that there now exists an Alan Doyle Cabernet Sauvignon, which prompted this question from its namesake:

"So I wonder what kind of pre-taste my wine would have?"