The "new" in Nouveau

November 17 marked the arrival of the 2010 Beaujolais Nouveau in liquor outlets, dépanneurs and grocery stores far and wide. It's been a long time since I've had some, so I figured it was high time I got some.

Reviled and adored in equal parts, Beaujolais Nouveau is France's lighthearted damsel who also goes by the name of Gamay. Grapes for this youngster come from the Beaujolais region, and are hand-picked, crushed, and left to ferment a mere six to eight weeks. The juice is then bottled and shipped, post-haste, to the far corners of the globe, on the third Thursday of every November.

Wine snobs pooh-pooh the Nouveau, often dismissing it as the "Kool-Aid of the wine world." Meh, so what? So it's light, fruity, easy, trendy. And? How is this a problem? 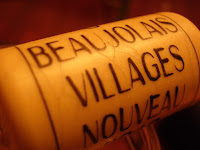 I picked up a few bottles to try:

Georges Duboeuf Beaujolais-Villages Nouveau (France, 12.5% abv) - You can't go wrong with Georges. He's the original, the one who coined the phrase Nouveau. He's a legend in the biz. (Well, except for that messy business in 2005, where his winemakers were caught mixing in plonk with other vintages and trying to pass it off as the real deal. But I'm not one to hold a grudge.) I can remember my parents coming home with Duboeuf's Beaujolais (both Nouveau and otherwise) on many an occasion.

We opened this one right away, with a Korean BBQ salmon dish. I don't know whether the sauce was too sweet or the wine just wasn't right, but the first few sips made me think of liquid cotton candy or cherry-flavoured cough syrup. Egads. But after it sat and aired out a bit, warmed up a little, the artificial vapours vanished and the bright berry aromas and flavours came through.

I noticed a couple of others standing in the same display: Mezzacorona Novio Vino Novello di Teroldego (Trentino, Italy, 12% abv) and Reif Estates 2010 "The Fool" Gamay Nouveau (Niagara, 13% abv) Both are new to me, especially the Reif one. I've sampled Niagara gamays before (you'll recall Chateau des Charmes Gamay Droit being a particular favourite of mine), but I've never heard of a local winemaker taking a stab at the Nouveau concept. I'm especially eager to give that one a try.

All that to say, at least there's one good thing about November, to counter it being dark at 4:30 in the afternoon. There's always a new wine to be had.