A Big Bite of Apple

Massive metropolises seem to be magnets for the greatest chefs, the savviest sommeliers, the most elaborate menus and the longest wine lists. New York, for example. You can’t visit the Big Apple and not eat well. This trip was a long time coming—a “girls’ weekend” for my mum and I first visualized when I was in my early teens—so I polished up the credit card, took a vacation from Weight Watchers and savoured every morsel.

Bistecca Fiorentina, on Restaurant Row, did simple Tuscan fare just right, in small portions bursting with flavour. The clams casino came swimming in their own shells in a white wine and butter sauce, topped with hefty chunks of bacon and roasted red pepper. I sopped up the leftover sauce with crispy chunks of bread only Nonna could make so well.
The creamy, mocha-coloured porcini and truffle risotto was done al dente and oozing with gorgeous earthy, musty flavours. The piping hot dish had barely touched down when the maitre d’ arrived at the table with mandolin in one hand and a giant, chocolate-brown truffle in the other. A few deftly executed strokes later, the fragrant, luxurious shavings were mingling with the parmesan and bringing me that much closer to nirvana.

Meson Sevilla’s cozy, bustling atmosphere and brilliant colours made for a welcome refuge after a long, cold day of non-stop rain. The specialty was tapas, those wonderful little saucers of spicy, savoury mouthfuls. Dinner consisted of artichokes sautéed with Serrano ham; grilled calamari that arrived at the table still sizzling in its own cast-iron skillet; and tortilla espagñola, a fluffy potato “omelette” run through with spice. In between chews, we guzzled on white sangria laden with slices of apple and citrus. (It’s way too easy to forget that stuff has alcohol in it …) 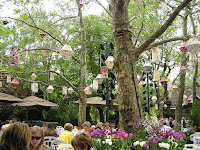 We’d been talking about going to Tavern on the Green for decades, so now that we were here in Central Park, we would be remiss not to go. We planned on having the tea service, but were disappointed to find out it would be served in a cramped, dark room up from the lobby. The sun was far too inviting to pass up, so we opted for a table in the gorgeous inner courtyard, surrounded by planters overflowing with foxglove and tulips, and trees adorned with lanterns of patterned silk. We sipped on glasses of Cuvee Henri 2005 Spanish sparkler over a lunch of barely seared yellowfin tuna in a salty seaweed and lotus root salad, and plump blue crab cakes with thick stalks of asparagus. Mum was in heaven after a bite of the crème brulee, served in a shallow dish and resplendent in its delicate glaze of flame-thrown sugar. (Even I liked it!)

Of course, there were times when we just wanted to eat. Enough of the fuss, just bring me a plate of decent food. Smith’s Bar and Restaurant fit the bill for breakfast, especially with its handy location across the street from the hotel. Café Borgia, a tiny spot on Prince Street in Soho, served up Panini oozing with fresh mozzarella and slabs of grilled red pepper. And who can pass up on down-home sweet potato pecan pie from The Row’s B. Smith’s?

Are you drooling yet? Brace yourself …

The (gastronomic) highlight of the trip was dinner at MoMA’s The Modern. I felt chic just walking in the door, enjoying the views of the Sculpture Garden, the sleek bar and the geometric layout. This was more than just eating, this was an adventure.

I think an entire meal could have been made out of the freebies: amuse-bouches of salmon caviar, goat cheese-stuffed slices of pickled radish, half a grape balanced on a piece of swordfish bathed in a sherry consommé. The salty fava bean crisps were totally addictive; we almost bit off our waiter’s arm when he kept trying to take them away. On to dinner …

The firm texture of the Riesling-poached foie gras was unexpected, but far from unpleasant. The banana and sweet pea mash on the side was practically a confection, it was so decadent. The guinea hen “en cocotte” was carved and plated tableside and had all the rich, comforting taste of a rustic peasant dish.

And while we’re on vacation, let’s really giv’r: how about a $26 GLASS of wine? Probably the best Pinot Noir I have ever tasted, the Ojai 2005 “Clos Pepe”, from the Santa Rita Hills of California. Everything a pinot noir should be, with ripe fruit, complex aromas and a smooth-as-silk mouthfeel.

A meal would not be complete without dessert … many, MANY courses of dessert. The Modern’s chocolate torte shares the plate with a boule of chocolate gelato and this OMGoodness ganache spiked with Cointreau. Mum’s lemon Neapolitan was light and refreshing, with zesty custard tucked between layers of vanilla tuile, served with crème fraiche and a kiwi coulis.

As if that wasn’t enough, here comes the “petit fours”: a ceramic box of truffles, a glass tray loaded with candied ginger, mini pistachio cakes and meringue biscuits, and two miniscule cones of raspberry sorbet, with one warm, ripe raspberry hiding inside. A perfect last bite of an exquisitely sophisticated dining experience.

When can I go back?