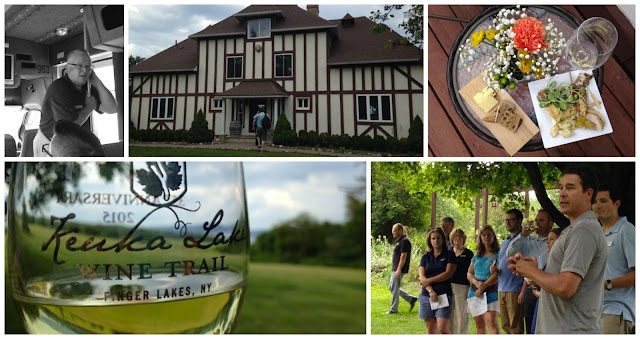 In the local Seneca language, "keuka" means "crooked." With its distinctive 'Y' shape, Keuka Lake is the only lake in the U.S.--and one of the few in the world--that flows both north and south. And it's the little-known birthplace of North American winemaking.

These little factoids came courtesy of Mikey "Merlot" Linehan, our host aboard the WBC15 Mystery Bus #5 on the Keuka Lake Wine Trail.

As we sipped on a 2008 McGregor Pinot Noir (from Mike's own cellar, bless him!), he regaled us with colourful anecdotes from Keuka's past. He told us about America's first bonded winery, Pleasant Valley, located in Hammondsport, on Keuka's southernmost tip. He told us about how the lake provides double-A-grade drinking water to some 40,000 residents. And he told us the story of Walter Taylor. Taylor, a radical purist, was making wine during a time when many New York operations were adding shipped-in juice and chemicals during production, without the public's knowledge. Walter's vocal protests against these practices got him thrown out of his grandfather's Taylor Wine Company; undeterred, he launched his own venture, Bully Hill Wines.

In 1977, Coca-Cola bought out Taylor Wine and ordered Walter to stop using his own family's name on any of his products. The legal battle stretched out over the years; in the end, Taylor lost. Still, Walter remained resolute throughout. The label of Bully Hill's Goat White Wine still bears his famous quote, "They have our name & heritage ... but they didn't get our goat!"

Mike entertained our little group as the bus wound up the hillside and pulled onto the rolling estate of Manor House. In the company of winemakers from the Keuka Trail's eight member wineries, we sampled two flights of Rieslings, ranging from bone-dry to syrup-sweet. Inside the Manor, we leisurely moved among food stations serving up small plates of grilled meats, local cheese, fresh greens and sweets, glasses refilled with even more splendid Keuka wines.

Sitting on the Manor's sprawling deck watching the sun set over the lake, it was easy to see why Walter made such a fuss about keeping things real. Seriously, when the land and the people can make such impressive wines on their own, why mess with a good thing?

Ravines 2013 Dry Riesling - Nose of flint and pineapple, followed by a full, round mouth feel, well-structured acidity and a spicy finish.

Hunt Country Vineyard 2014 Dry Riesling - Acidity dominates in this one, with loads of citrus, mint and tropical fruit meeting the senses.

Barrington Cellars 2013 Dry Riesling - Up front, a refreshing burst of mint and mango with a subtle undercurrent of petrol. Impressive balance, fruit and restrained acid on an elegant finish.

McGregor 2010 Rob Roy Red - You're right, this isn't a Riesling. But it was a fantastic blend of cabernets and merlot, a rugged, wild wine with rich fruit, muscular tannins and firm acid that could easily hold up another couple of years. Although, it's so scrumptious now, I might not be able to wait that long ...