Following "The Dream" at Broken Stone 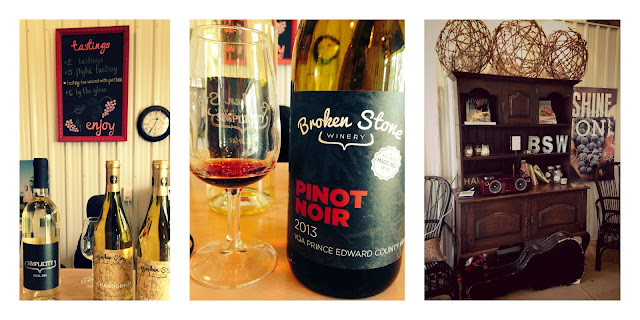 Winemaking is about passion. It has to be. If you're in it for the money or the fame, then you're in the wrong business.

Tim Kuepfer, of Broken Stone Winery, gets that.

And when you taste his wine, that passion shines through.

Broken Stone is situated on Closson Road--the unofficial "winery row", if you will, of Hillier. It opened to the public in 2013, after a long, hard road of sacrifices and obstacles overcome by passion.

Tim pours samples for me and we talk about The Dream, the one that got the Kuepfer family to where they are today. Not too many people have the courage to follow through on the old adage of "follow your dreams." But it was the driving force behind the family's decision to take on the monumental task of running a winery.

At first, it was Tim and Micheline's vision of owning a home in the country amid wide, green fields, far from the urban sprawl. So, in 2009, right in the middle of a worldwide financial crisis, they bought some acreage in bucolic Prince Edward County. Because why not?

For a while they tinkered with the existing vines growing on their lot and were surprised by the successful results. The 'hobby' started to take on the shape of something serious: instead of just growing grapes, why not make wine? Tim signed up for online viticulture and winemaking courses with UC Davis, and spent weekends commuting between the family home in Toronto and the fledgling vineyard in the County.

The Dream kept the Kuepfers going through long periods apart and financial strain. "You know what Broken Stone is backwards? Stone broke. It's quite apt," Tim says with a wry grin. They still hope to build their country home and permanently move the whole family to the County--at some point. For now, they're focused on making exceptional wines. And judging by the passion found in each bottle, The Dream looks like it's coming true.

Up front, the 2014 Chardonnay is slightly briney, but then luscious pineapple and pungent lychee comes through on the nose. It is lightly oaked, only enough to give it soft notes of vanilla and cream, leaving the spotlight for the fruit. Excellent balance, with a bit of a tangy, sour-apple finish.

The 2013 Pinot Noir has a rich garnet glow, smudged with a bit of terroir brown. The complex range of scents keeps changing with each sip: cherry and cocoa, undergrowth, raisins, violets. Wraps up dry, dusty and smooth.

As a bonus, Tim offered up barrel samples of the 2014 Pinot Noir Reserve, which exploded with earthy, barnyard aromas laced with plums and violets. (Sign me up on the futures list for this one, cuz it's gonna be epic.)