A pause in the shovelling 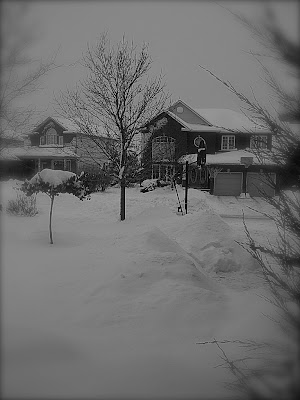 The plow had just gone by. A short but wide dyke of snow and salt lay waiting for me at the end of our (very long) driveway. I groaned. It was either now, at 10 o'clock at night, or it would be tomorrow morning, in the midst of the usual joyful chaos of trying to get out the door on time (which never seems to happen.)

I opted for tonight. Begrudgingly.

I tried attacking the drifts with super-woman strength, barrelling at them full-on and trying to lift three times my weight two feet higher than the top of my 5'1" frame. Yeah, that ain't gonna happen, my back reminded me. So it meant a longer time, smaller loads, and quite a bit of dragging chunks across the road, but at last it was done.

Out of breath and aching, I put the shovels back in the garage and started back to the house. But I paused for a moment on the doorstep to survey my work.

The breeze, not as menacing as it was a few nights' past, teased a few tendrils of snow from the rooftops, sending down a shower of pixie dust. The long stretch of unbroken cloud cover reflected the city's orange glow; to the south, it took on the greenish tinge of the airport lights, and fluttered like the aurora borealis. The distant murmur of traffic barely registered in the quiet, the noise muffled by high banks surrounding each house like the fortified walls of a king's keep.

The only other sound's the sweep
Of easy wind and downy flake.

Frost knew what he was talking about. Even with the shovelling—and the bad driving conditions, short days, having to walk around with three or four layers on everywhere you go—the beauty of winter is quite the sight to behold.

Back inside, I rewarded myself with a glass of Foreign Affair 2009 Riesling (Niagara Peninsula; 13.4% abv; $24.95 winery only). Hubby and I picked this up during our last tour in Niagara, when we popped in at a few places that were still new to us. We almost gave up on finding this winery, hidden as it was, within a cluster of old buildings once used as an agricultural research centre. But the wines were worth the trouble; the riesling, in particular, was remarkable.

(Quote from "Stopping by Woods on a Snowy Evening" by Robert Frost, 1922)

Cellared under: niagara, on writing, ottawa