I was mid-sentence in a conversation with my colleague this morning, when I noticed this sitting on her desk: 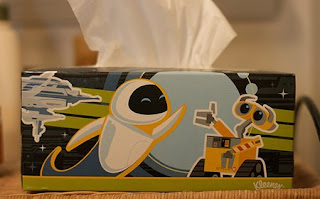 In no uncertain terms, I demanded to know, "WHERE DID YOU GET THAT??"

Living in a house with The Doodle means watching Wall-E about three million times. We've tried other movies - for a while it was Dumbo, right now it's Bambi - but she's got a soft spot for that little, rusty, slightly dusty robot from the future. She's even memorized all the extras ("When Eve moves, it's kinduv like something underwater, kinda like a manatee? Or a narwhal?") If I have to sit through another running of the "Lots of Bots" game (aka the Red Robots) I think I'm going to take a hostage.

She has a better understanding of the remote control and DVD player than her father and I combined, and knows how to load, eject, play, fast-forward and stop. At THREE AND A HALF. Egads. Next thing you know, she'll be dragging a soldering iron down to the basement to build her own Wall-E.

We are repeatedly being told that she's not "sweetheart" or even "Doodle". No, Mummy, I'm EVE. I'll be Eve and you be Wall-E. (Well, at least it used to be that way. I've since been kicked to the curb in favour of her little boyfriend at daycare, who sees her in the morning and says, "Hi Eve!" We're having him and his parents over this weekend to discuss the dowry ...)

Needless to say, I owe my colleague a Kleenex box ...