Montreal to the max: An Anniversary Extravaganza

Every so often, I think it’s absolutely essential to partake in a fancy dinner out, a weekend at a luxurious inn, or a day at the spa just to treat yourself to some pampering and indulgence. It’s good for your mental health. Especially for parents. Leave the tots and go whoop it up a bit.

Recently, hubby and I enjoyed four days of purely decadent (and child-free) living in Montreal, where we had the privilege of attending a grand celebration hosted by his grandparents on the occasion of their 60th wedding anniversary. Relatives had travelled from all points of the compass for this milestone event—and boy, do they know how to party.

We descended on the Intercontinental Hotel en masse and pretty much ran the place from start to finish. You couldn’t get from your room to the lobby without bumping into at least one other family member along the way. We invaded the restaurants, the Club éxecutif (aka the "Booze Floor"), the shops, the salon, the lobby. We laughed, drank, ate and revelled in a never-ending festive state of being. (Gawd help the staff and the other guests who were unfortunate enough to stumble across our little party.)

While a few of the English cousins proclaimed the offerings of a local pizza joint were the “best they’ve ever had” because the crust was dotted with sesame seeds, (something they insisted was sorely lacking in London) the true crème de la crème in terms of food and drink came at each of the three luxurious, extravagant feasts set out for us, courtesy of Grandmaman and Grandpapa (many, many, MANY thanks!)

Cocktail reception, Les Huitres
The space itself is worth the visit. Tucked in the lower levels of the Intercontinental, Les Huitres – along with its sister rooms, La Cave and Les Voutres – are designed in the style of wine cellars, with white-stuccoed, vaulted ceilings and warm lighting. The intimate setting was perfect for our group, as we flitted back and forth between our tables, the bar and the buffet.

The martini bar was a huge hit. Favourites included the cosmopolitans and the Armillory Snicker: Frangelico, Bailey’s and crème de cacao. A little guy in penguin suit worked the room with a tray of mini croque-monsieurs (fancy grilled cheese! Sweet!), crab cakes and dumplings, all of which required frequent refreshing. The buffet’s showpiece was a mirrored pyramid stacked with amuse-bouches of smoked salmon rolled around sprigs of asparagus; tiny slices of cucumber laden with chunks of lobster, and rare roast beef stuffed with julienned veggies. It was very easy to lose track of how much I was snarfing down.
Black-tie dinner, Salon Vieux Montréal, Hotel Intercontinental
After a lengthy photo session that involved much arm-waving, shouting, the precarious use of antique benches and lots of liquor, we were treated to an exquisite five-course dinner. I was particularly impressed with the beef tenderloin in a port and morel reduction with a medley of potatoes and mini car(rots). Perfectly cooked to medium-rare, with a melt-in-your-mouth texture and the exquisite flavour of truffles, alongside a glass of George Duboeuf Brouilly. The dessert, individual ombre et lumière cakes, combined creamy white and semi-bitter dark chocolate mousses in a crisp chocolate shell, paired with Veuve Cliquot Ponsardin Brut.

When GM and GP (as they are affectionately known by the family) weren’t spoiling us rotten with copious amounts of fine dining, the city offered equally mouth-watering, yet comfortably unceremonious, fare. Reuben’s, a Montreal institution on Sainte-Catherine and a must for anyone visiting the city, served up mile-high smoked meat sandwiches that amazed our overseas relatives. Actually, it’s more of a pile than a sandwich – the tiny slices of rye perched precariously on top of obscenely huge mountains of meat are purely decorative, given that you require a knife, fork and four days to get through it. Most people were c

ontent with the Classic, whereas hubby took on the Pepsi challenge of the Big Bang, twice the size of the usual sandwich. Hello, meat sweats?

In Vieux Montréal, we discovered Marche de la Villette, a colourful charcuterie and boulangerie festooned with mammoth butterflies and flowers, with racks of proscuitto dangling from the ceiling and the table d’hôte scrawled in pink and yellow chalk on the blackboard. The tiny space buzzed with the boisterous chatter between staff and clients. Sangria graced our table in generous goblets edged with sugar and crammed with chunks of apple and orange, while we dined on more decadent croque-monsieurs, earthy potages of root vegetables and soul-warming spice, and salads featuring vegetables so flavourful and fresh on their own the dressing was forgotten. 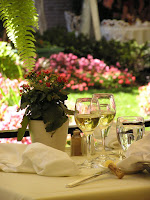 Sunday Brunch, Le Jardin, Ritz Carlton Hotel
Another location worth writing about simply for its visual appeal. An intimate, tented space off the main restaurant, Le Jardin was lush with vegetation, trailing vines and carefully manicured lawns. A gaggle of white geese snoozed in the noon sunlight, dabbling every so often in the private pool that graced the middle of this little Eden. The wrought-iron chairs, crisp linens and plentiful mimosas beckoned to us ... as did the vast assembly line of food at the buffet.

We're not talking your ordinary Sunday brunch here. I counted about nine different kinds of salads, including Dijon potato, marinated calamari and real Caesar varieties. A leg of lamb was carved on the spot and served with any number of accoutrements. The eggs Benedict was cooked to order and positively dripping with yolk and hollondaise. The desserts took up a whole other section of the room, with tables groaning under the weight of elegant teacups of dark chocolate mousse, golden creme brulees and miniature tiramisu sundaes.
I agreed with a table mate that this most certainly was NOT a Weight-Watchers-Points-friendly meal by any stretch of the imagination. To hell with the guilt – another slathering of hollandaise, please.
By the time Sunday evening came and we had rolled ourselves back home (both figuratively and literally) our stomachs had finally tapped out, crying “enough!” as we settled our bloated selves into bed. So. Much. Foooooooood.